In Search of OD&D Part 3: The Northern Shores of Tamerthya

In part 1 and part 2 of this search for OD&D, I asked the question: does my old friend Mike McDowell's 1992 game style, the one that has for years haunted my memories as being so immersive that it blurs the lines between fiction and reality, exist anywhere other than the past? Also, I detailed my brief research of Dave Arneson's first fantasy campaign setting called Blackmoor, because statements by his original players caused me to infer they had also experienced a similar game style to the one I played way back in the nineties. I never came to any solid conclusions about how to experience Blackmoor the same way as the old-timers, until now. 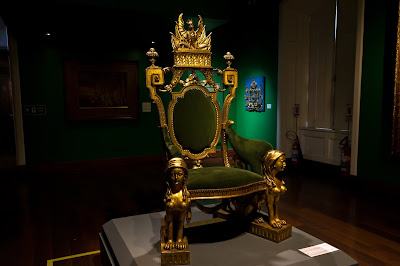 Several hours before the "OD&D: Tamerthya" game that I signed up to attend at Garycon's Autumn Revel 1, the Dungeon Master Dirk Collins sent me an email that contained links to three PDF files called Tamerthya, Fantasy Price List, and DnD Towns North Slope. Imagine my surprise when I opened the DnD Towns file and saw this:

Does that look familiar? In my previous post I lamented about the raw data from Dave Arneson's Blackmoor campaign that I didn't understand how I was supposed to use to play Dungeons & Dragons the way I was familiar with. This data looked remarkably similar.

Later in the day when the scheduled time to play in Dirk's game arrived, all of us players were invited to log on to Roll20.net which is a virtual tabletop website that I have some experience using. Dirk indicated that we should each pick a pre-generated 5th level character to play as. I always gravitate towards playing magic-users so I picked a human female wizard named Isa Farstar, although I wasn't entirely keen on playing a female (it always feels wrong somehow). So far this game was like every other role-playing game I have ever played.

Then Dirk asked us to pick a city to rule or control or... actually I'm not entirely sure how he phrased it but I picked the port city from the picture above, Lesym Flym. Okay, that is something I couldn't remember doing in any game I've ever played.

Our dungeon master then said we could buy our starting equipment. Isa Farstar had around 9,000 gold pieces on her which I thought was a lot but then Dirk said we could also use the money from the treasury in our town. Lesym Flym had 38,454 gold pieces in its treasury!!! I was pretty impressed with starting a game with that kind of buying power but then I opened the PDF called Fantasy Price List:

I stopped cold here on page 3. There were options to buy dragons and trolls! That was actually somewhat overwhelming to imagine, so out of caution, I settled for purchasing a +3 longsword which was also fairly amazing.

Next, gameplay proceeded around the virtual table with Dirk displaying a map of the city that each player was in charge of and a map of the surrounding countryside. I had enough forethought to grab a screenshot of my Lesym Flym. 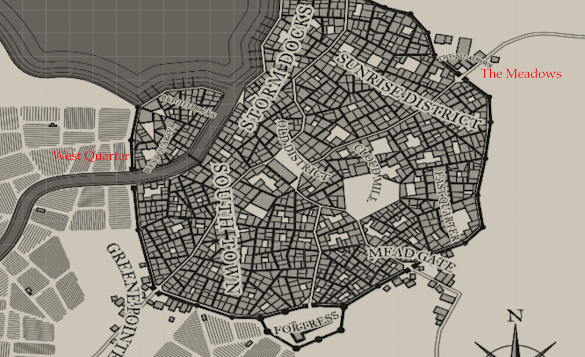 During each of my successive turns I was able to do what seemed to be about a weeks worth of activities which I think amounted to about 20 minutes of one on one game play each time with Dirk while the other players listened. The first thing I noticed was that there was the symbol for a mine nearby to my city. When I asked the DM about it, he asked if I would like to go check it out. I told him I wanted to send 20 of my light cavalry to the location to secure it. When they arrived, the mine was already occupied by dwarves who were in the process of working it. Because my character, Isa, is a Magic-User she obviously had access to a selection of known spells. I used the ESP spell to directly communicate with the lieutenant of my cavalry and instruct him to tell the leader of the dwarves that we have laid claim to the mine since the founding of our town and that we demanded controlling interest in the mine. Their leader said he would need to talk to the elders of his clan which were away at that time. At that point I instructed my men to return home. I also initiated an inspection of my city walls by my stone masons and the captain of my city guard. That was the end of my first turn.

On subsequent turns, I had my scribes draft a contract with the dwarves for my controlling interest in the nearby mining operations. I sent a group of about 20 miners and apprentices to the mine. I began construction on a second set of gated wall enclosures around the three existing gates of Lesym Flym and a portcullis that could be raised and lowered into the river which flowed into the city from the west. I set up a meeting with the bishop of the largest organized religion inside my walls to discuss the catacombs beneath the city and what ancient magics may be entombed there. Three of my four war galleys made birth from Lesym Flym and charted a course north under my order of exploration.

There were noteworthy things the other players did as well.

Another player named Sarah was playing a character named Lord Bitroch. Bitroch had actually left his town early in the game on a mission of exploration and diplomacy and had stopped at one other players towns and made peaceful contact. By the end of the entire session Bitroch and his entourage had arrived on the horizon to the south of my beloved city. In-character I did not know the intentions of the approaching force, and had the captain of my city guard sound the alarm to close the city gates. Bitroch and his associates approached with loud declarations of peace and private concerns of xenophobia on my part.

After the show of fortification, I opened my gates to the ambassador and he subsequently offered an invitation to join a trade council of sorts. To which I agreed on the condition that I be allowed to send my own ambassador with Bitroch on his further travels of exploration. He acquiesced and I allowed him to take a tour of my shipyards so that he could get a better idea of how to construct his own shipyards upon return to his city. Further, I took down payment of 5,000 gold pieces to begin construction of a ship for him.

Other memorable things done by the rest of the players were that a tournament was announced and invitations dispatched to the four corners of the known realm. A pact was made with some local forest dwelling druids. Demi-humans were asked to leave one city because they weren't wanted there and elsewhere other demi-humans were invited to come to a religious cult type of city.

By the end of this whole thing I had come to three realizations. First, no combat had ever taken place although one or two checks were made for wandering monsters by Lord Bitroch during his travels. This lack of battle did not detract from the game one bit. Second, playing this game had caused me to experience that completely immersive game style that I had been looking for off and on since I was 15 years old. Last, and most importantly is that I knew with absolute certainty that from now on this was the style of game that I really wanted to play and even run above all others.

From here on out, I will do whatever it takes to be involved in this game and others like it.

Speaking of this game, Dirk Collins is running two more upcoming convention games like this one that take place in other parts of the Tamerthya continent. They are both at Virtual Gamehole Con and it takes place NEXT WEEKEND!!! If anyone reading this would like to play in an RPG unlike most everything else being played right now, follow the links below and above all else have fun!