In 2017 I started playing role-playing games again after close to 20 years of hiatus. I've been looking for answers ever since.

Way back in the 90s I had played two dozen or so games of Dungeons & Dragons using TSR's then popular 2nd edition rule set. Most of the games seemed similar in style to me and could best be described as one shot games where one of my Dungeon Master friends would make up content on the spot as we played. I would always be in control of my own character and it's powers but not much else.

There was one stand out game from back then that has always been what I have called my favorite game session of Dungeons and Dragons. It was a solo game where I was the only player with my old friend Mike McDowell as the DM. The basic gist of that scenario was a heavy emphasis on fortification of a fictional frontier town to protect against a looming invasion from unknown forces in the wilds.
My character at the time, who I remember as being a Ranger named Aaron Presney, Sheriff of Teneth, personally oversaw the construction of a wooden palisade to serve as city walls, the installation of hot oil vats above the one gated entrance, and the training and equipping of a small defense force pulled from the local townsfolk. I initiated all of these in-game changes and Mike narrated their reality.
Before the impending siege I took to the catwalk atop of the newly built defensive perimeter and gave a rousing speech about our upcoming perseverance and victory against the looming invasion. I want to emphasize that so engrossing was this game with Mike, that I can still remember standing atop those walls and seeing the thousands of faces of the townsfolk cheering below. I remember walking the nearby fields and watching the volunteer army train for battle. I remember witnessing the laborers at work in the nearby forest, cutting down the trees and hauling them back to town to build our wall. I remember actually being there!
Unfortunately for village of Teneth, one night we were suddenly under attack from within by large dog men creatures called gnolls. It turns out that while I had my villagers fortifying our home above ground, these gnolls had been digging tunnels under our very feet. The slaughter that followed is a blur of torchlight and blood in my old memories. 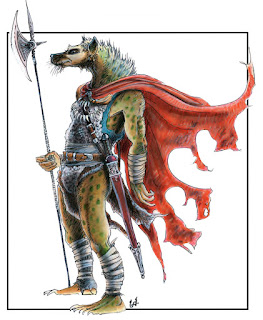 Gnoll (source)
That's all there was. We stopped playing at the point of the city being overrun. Maybe I was killed in the chaos? Perhaps the city was completely decimated? Maybe my friend saw how attached I was to the character and his life and didn't have the heart to tell me there was no happy ending? What if Mike didn't have enough mastery of the rules to pit thousands of attackers against thousands of villagers?
I may never know.
Fast forward to the recent past.
In the last three years, I've been on a role-playing game journey, searching for answers. The questions are always changing and the answers sometimes cause multitudes of new questions but the journey has been fun. I've met a lot of passionate people and played at many different venues but it seems that there has always been one elusive question floating around at the periphery of my consciousness. It's never really had form or structure but I'm sure that it has been there this entire time. It hasn't been put into words until now.
Does McDowell's 1992 game style, the one that has for years haunted my memories as being so immersive that it blurs the lines between fiction and reality, exist anywhere other than the past?
Yes. Yes, it does.

Be sure to check back for part 2 in a few days or so!