The Fight On! Compiled Index +4

Way back in 2008, many up-and-coming role-playing game writers combined varying portions of their proprietary artistic game content to create a quality fanzine named Fight On! This outstanding publication was devoted to the earliest sets of rules for RPG's, such as Original Dungeons & Dragons, 1st edition Advanced Dungeons & Dragons, Empire of the Petal Throne, and several others. Eventually the 'zine topped out at fourteen issues released over a period of five years. According to a message board or two, there has been a fifteenth issue in the works for several years, but it has yet to manifest to a hard copy.

In May of 2011, the first four issues were combined into one large tome named the "Fight On! Compiled Compilation +4". 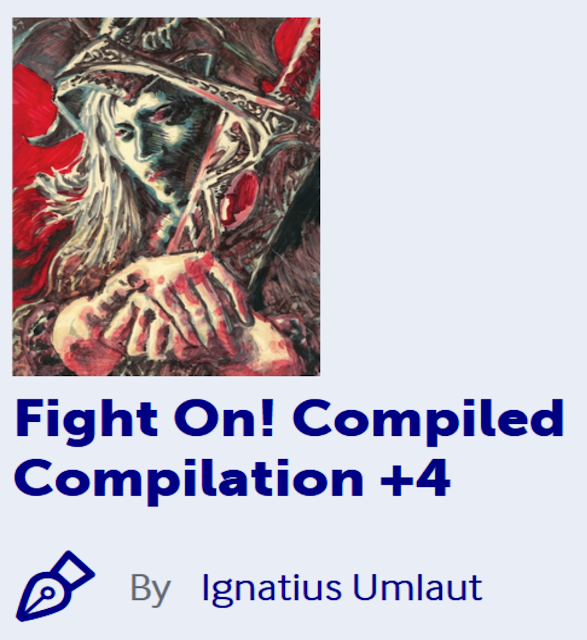 This well manufactured Print On Demand book is available from lulu.com. The price is ridiculously reasonable, especially considering the vast amount of content contained within from some of today's heavy hitters in the Old School Renaissance gaming community.

One thing that becomes inescapably clear when I sift through the contents of my personal copy of this treasure is that there are tons of new monsters, unique magic items, spells, and quick reference tables that deserve, no, DEMAND to be used in current game sessions. The book is heavy on other valuable content as well but, in the end, quick access to the information I listed before simply doesn't exist. I've recently found myself wanting to look at the name and location of every magic item all at once to better decide what I would like to borrow to add to my personal campaign world. After fumbling around with fluorescent post-it notes and scraps of paper for several weeks, I have finally decided to take matters into my own hands.

Without further ado, I am pleased to present something I thought

would only take three days to complete but, in fact, took three

Guys, I wanted this thing to look good and be easily accessible to anyone that would like to use it as a free supplement to the book. Hopefully, I have succeeded in both areas but I invite you to be the judge. This PDF file is intended to be printed, stapled, folded in half, and placed inside the front cover of the book itself but you may use it however you see fit. Just use it.